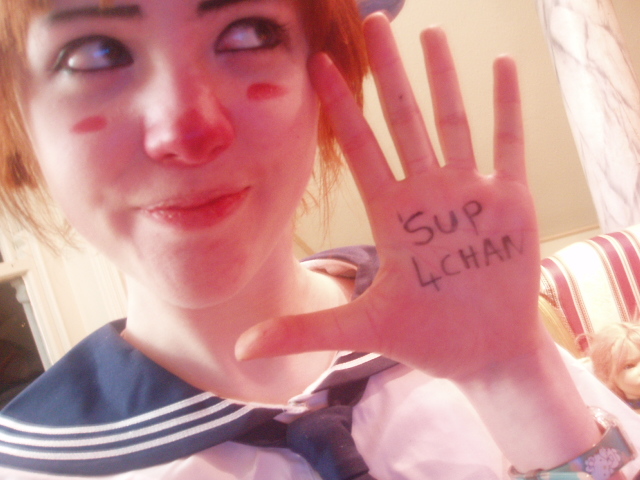 THE LEGEND OF CRACKY

In January 2005, a girl wearing lipstick on her nose and under her eyes, as well as " 'Sup 4CHAN " written on her hand in black marker, posted on 4chan's /b/ imageboard. A "clever anonymous" gave her the name "Cracky chan" due to the red nose, making her appear as if she snorted crack. Chaos broke out and obsession began. The pictures were endlessly reposted, people demanded more images and clamored for Cracky's return. Obsession began and Cracky Mania had completely taken over /b/. Cracky became wordfiltered on /b/. The stalking began, it was a race to see who could get what first. Cracky's "Scarecrowmaiden" Livejournal was eventually discovered and the images that it contained were posted on /b/ to much madness. The images were mostly disturbing and dark. The "7 Days" series, for instance, contains Cracky with her own menstrual blood on her face. It was also where Cracky's birthdate and location of Oxford, England were seen. Snacks had earlier reported the IP was based in the UK but the Livejournal confirmed it 100%. During the summer, things heated up. Snacks, a moderator, had enough of Cracky being all over /b/ and began to make it an unofficial rule that Cracky could not be posted or talked about. Any Cracky content was met with a ban. It was revealed that Cracky had sent him a single e-mail requesting that he clamp down on the hysteria. 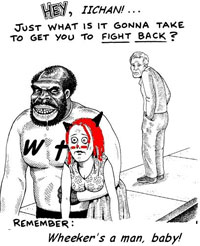 The aggressive anti-Cracky policy had made Cracky fans post on 420chan's /b/ until a stand-alone Cracky board was eventually created. /Cracky/ was where things were taken to a whole new level. Impressive stalking and information gathering, as well as professional analysis on Cracky's possible mental health took place on this board. People of all ages and backgrounds contributed in this massive effort to find out about this troubled girl.

In early 2006, Cracky discovered the /Cracky/ board on 420chan. She made a post as "you know who I am" saying she was disturbed by the board and wanted to be left alone. Chaos ensued as the thread filled with replies. Eventually, the "braided hair" images were posted as proof it was actually Cracky and not a troll. After some discussion and an AIM chat with some of the more prevalent stalkers, /Cracky/ was taken down per Cracky's request. 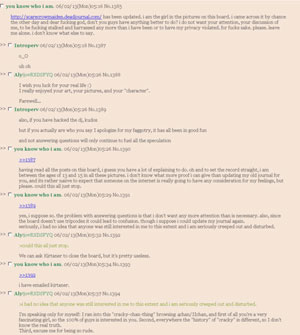 Around the time of 420chan's /Cracky/, a site, "Crackypedia" was put up. It contained a large collection of original Cracky images, Cracky-alikes and fan-art. This site, too, was eventually taken down.

After /Cracky/ and Crackypedia were down, everyone wasn't sure what to do next. Cracky came back, cleared up some things via posts and the AIM chat, and left again. Were things finished? Was it over? Obviously, it can never be over. Sometime later, Cracky.bounceme appeared. It was a Cracky image board that also provided a mirror of the old Crackypedia site. There was a no-stalking rule but as time went on, it became less enforced. At this time, it was believed Cracky's real name was Lianne or Lia for short. Cracky.bounceme had many problems with the .bounceme domain and downtime. Eventually it would come to be accessed just by the IP of the server. It became known as ".71" instead of Bounceme.

Summer 2007. A stalker found a bombshell that led to Cracky returning once again. He found a great deal of her information and attempted to contact her through multiple mediums. She and the stalker conversed via AIM and Cracky herself eventually posted on Bounceme as "Lia".

After a few additional posts, the famous "platinum blonde" images, and an absolutely terrible second AIM chat, Cracky once again left. There were additional revelations, such as the fact Cracky is an avid player of World Of Warcraft and has a new boyfriend. Some satellite maps were posted and hints and discussion about various relevant locations took place. Once again, everyone wondered where to go from here? Just like with 420chan, a lot of people got out of things and went their own ways. Some returned, others stayed away.

Bounceme is now called .71 and is mostly relegated to poetry, rants of passion, image manipulation, angst, tales of woe, trolling, tl;dr and misc. Cracky discussion. Some have learned to separate Cracky from Olivia and have thus moved on from the obsession. Others are still trapped in the endless cycle. Update (Outdated, left up for completeness) : Both .71 and chansluts were recently wiped. Wish.Kamistik is currently where the Cracky discussion goes on.

Crackyhouse initially appeared as an alternative full of freedom and expression but slowly turned to shit. Crackyhouse was relaunched with a new layout and a lighter, friendlier image.

"Cracky is so fucking cute and sweet." Cracky posted on /b/ at a time before camwhore-ism really took off. Many became obsessed with her. She was cute and later revelations of her dark art, cutting habit, and alternative interests made her an easy target for the lonely, depraved visitors of /b/. It was comforting to know someone like Cracky also had these problems and was lurking the board. Cracky was also a sort of taboo, what with the moderation crackdown. She was forbidden and this only made people more interested. This was before anyone really knew what /b/ was capable of, and the true nature of the beast. Beyond that, it varies for each person. It is easy to use the "Cracky" character as an icon of your hang-ups, loneliness, depression, as well as hope. Cracky is catharsis.

Another community early on in the Cracky saga was found in Slashdot Trolltalk. It was eventually crapflooded into oblivion. iichan contained Cracky discussion and was home to the Cracky collages of all of her early images for a very long time. Wish.Kamistik had a short-lived Cracky board that co-existed with Cracky.bounceme for a time. There was a Cracky community on chan-chan that eventually evolved into a Cracky board on the current Chansluts site. Cracky has revealed in the first AIM chat, that she has cut her lips, stomach, breasts, legs and arms. You can see many of these wounds in her images. She has also had an eating disorder, stomach problems, sleep problems, and dealt with depression.

The simplest way to end all of this is to content flood. Release new images, make a public blog, make your profiles public, create videos, let everyone hear your voice; do it all. Let everyone see who you really are and they will get over the illusions they suffer from. Kill the intrigue and mystery. Destroy the allure. This is the best scenario for both the obsessed and yourself. I hope you will consider it.

Forget all of that.

We made this page for you... 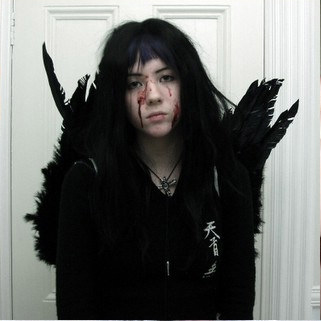 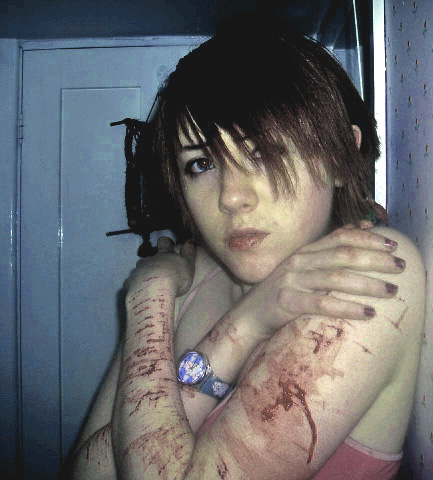 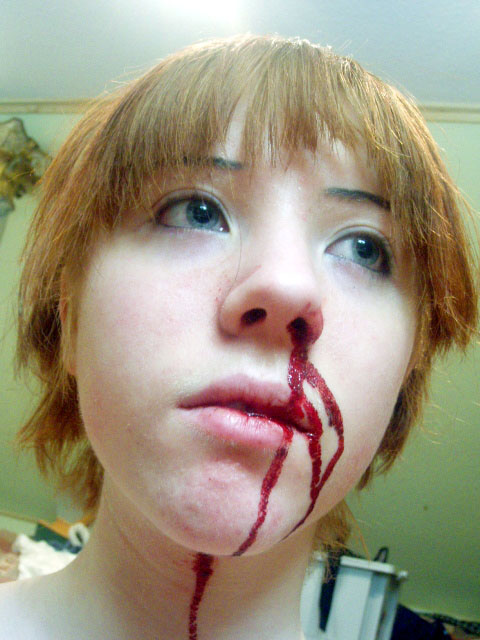 The truth is out there.

READ ABOUT CRACKY IN JAPAN 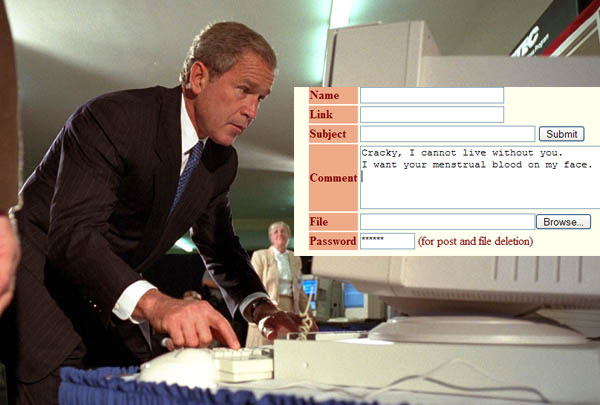